“Dear Mrs. H.,—I am forever your debtor for reminding me of that curious passage in my life. During the first year or two after it happened, I could not bear to think of it.

My pain and shame were so intense, and my sense of having been an IMBECILE so settled, established and confirmed, that I drove the episode entirely from my mind—and so all these twenty-eight or twenty-nine years I  have lived in the conviction that my performance of that time was coarse, vulgar and destitute of humor.”

SOURCE:  Mark Twain letter sent June 11, 1906 to an admirer. The letter related to a speech Twain gave in honor of the seventieth birthday of John GreenleafWhittier, at the Hotel Brunswick, Boston, December 17, 1877. Twain totally BOMBED on that night and was much criticized by the media for uncouth andinsensitive remarks.

You can learn why Twain worried why his “performance of that time was coarse, vulgar and destitute of humor” in  What Mark Twain Learned Me ’bout Public Speakin‘  which provides wit and wisdom on speech writing and speech-making while also providing examples of success and failure from the great man. Lessons that will “learn* you” to craft better speeches and presentations.

*“When I say I’ll learn (‘Teach’ is not in the river vocabulary) a man the river, I mean it. And you can depend on it, I’ll learn him or kill him.’  Life on the Mississippi – Mark Twain 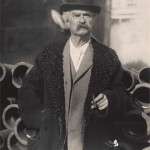