It is a question that is often asked – Who was St. Patrick?  In this short video clip, IrishmanSpeaks Conor Cunneen showcases a little piece from his book For the Love of Being Irish which will answer the question. Enjoy.

Who was St. Patrick?
He’s our patron saint
Which is really quite quaint
He brought Ireland the faith
He made us holy and great
But Irish? St Patrick? He ain’t!

St. Patrick’s first visit to Ireland did not exactly evoke images of “Ireland of the Welcomes.” Captured by marauding Irish warriors, the Welsh or Scottish born 16 year old spent about 6 years in Ireland as a slave. After his escape, precipitated by a voice from God telling him to leave, he became a priest.

Patrick then returned to Ireland bringing the Catholic faith. Legend has it he drove the snakes out of Ireland. Well, the ones that crawl anyway!

St. Patrick and the Shamrock

Another legend has it that St. Patrick used the shamrock to illustrate the mystery of the Holy Trinity and how three could be one. To the native born Irish, the shamrock is a three leafed item. Technically it is a clover, but in our  thinking a four leaf clover is NOT a shamrock and it drives us nuts when the two are mixed up.

Today the shamrock is probably the fastest way for the stranger to appreciate an Irish association. You will find the shamrock adorning Aer Lingus planes, Glasgow Celtic jerseys and the windows of Irish pubs from Maine to Madrid.

Purchase your personally signed copy of For the Love of Being Irish today. ORDER NOW at The Shamrock Shop – Conor’s Bookstore

Hope this helps you in a very concise manner to answer – Who was St. Patrick? 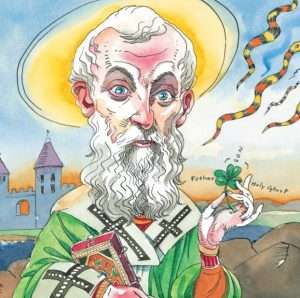 This wonderful illustration of St. Patrick by Mark Anderson appears in For the Love of Being Irish by IrishmanSpeaks – Conor Cunneen. Get your autographed copy today

Conor Cunneen is an Irishman, happily exiled in Chicago where he says -mischievously – that the Guinness is good, the natives are friendly and he has been force fed more corned beef and green beer than he ever had in Ireland!

As an Irish immigrant, he is a very proud recipient of the President’s Gold Medal for Volunteer Service for the work he does with job seekers.

He is proud dad to John and Amy and a loving irritant to his long suffering wife, Pat, whom his sister-in-law states will be canonized the moment she leaves this planet!

He is also an in-demand keynote speaker, facilitator, author, consultant, award winning humorist and master of ceremonies to associations, corporations and healthcare.