Twain despised the shenanigans and lack of integrity for the political system and was mutually critical of both sides. He reserved particular angry commentary for the corrupt politics of Tammany Hall and in particular Richard “Boss” Croker who dominated and manipulated New York politics for the latter years of the nineteenth century. Croker is one of the few bad things to come from my home county of Cork, Ireland!

This diatribe from Twain is modeled on a famous Edmund Burke House of Commons speech calling for the impeachment of Warren Hastings, Governor General of India. 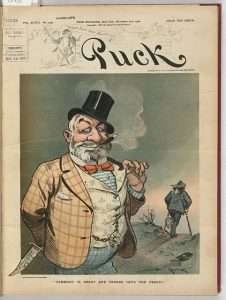 I impeach Richard Croker of high crimes and misdemeanors. I impeach him in the name of the people, whose trust he has betrayed.

I impeach him in the name of all the people of America, whose national character he has dishonored.

I impeach him in the name and by virtue of those eternal laws of justice which he has violated.

I impeach him in the name of human nature itself, which he has cruelly outraged, injured, and oppressed, in both sexes, in every age, rank, situation, and condition of life.