Mark Twain was seen by many as a superb impromptu speaker. He probably was, but he prepared his material diligently and rarely relied on impromptu material.

His good friend and critic William D. Howells wrote of the great humorist, “He studied every word and syllable, and memorized them by a system of mnemonics peculiar to himself…….. He studied every tone and every gesture, and he forecast the result with the real audience from its result with that imagined audience. Therefore, it was beautiful to see him and to hear him; he rejoiced in the pleasure he gave and the blows of surprise which he dealt.” (Mark Twain Speeches – Introduction by William D. Howells) 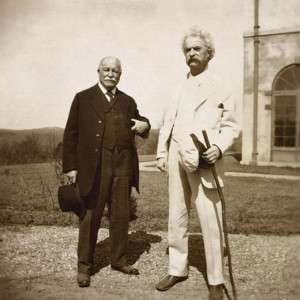 What Mark Twain Learned Me about Speech Preparation  (and hopefully you!)

There is no substitute for preparation, rehearsal and practice. Sir John Colville, Private Secretary to British Prime Minister Winston Churchill during the dark days of World War II said the great statesman invested “approximately one hour of preparation for every minute of delivery.” This would suggest that the British Prime Minister devoted as much as thirty hours to crafting and honing speeches that lifted the hearts and spirits of a desperately besieged Britain. Colville may have exaggerated the time the “British Bulldog” took to craft his speeches, but there is no doubt that he prepared diligently just like Mark Twain. We all should prepare diligently if we expect our audience to pay attention and leave with a message that will benefit them.

Twain liked to write his speeches out a few weeks before the event. – “I used to begin about a week ahead, and write out my impromptu speech and get it by heart,” wrote the man who was christened Sam Clemens. As a professional speaker to Corporations, Healthcare and Associations, I make diligent efforts to customize my core material to client needs.

Customize and Prepare your Material

Here are a few steps that I believe Mark Twain would approve of to help to customize and prepare your material.

2)      Set up Google Alerts for the client and related events / material. This will help you to stay current on what client is doing but also helps understand the history / issues / challenges which the client has. This will allow for even better questions at the next client briefing.)

4)      Create a Twitter list of client competitors, industry publications and relevant associations. This provides a wonderful insight into the industry.

More examples to follow in a later post, but if you implement these simple steps, you will not be winging it but you may be winging it later to a repeat engagement. Why? Because you took the time to work on your presentation skills and prepare your message

The book features nine lessons he learned from the great author and humorist encapsulated in a unique MARK TWAIN acronym.

If you’re seeking a speaker whose Brand Promise is E4: Energize, Educate, Entertain and Easy to work with, contact this convivial Irishman Conor Cunneen.

Conor Cunneen is a Chicago based motivational business speaker whose humorous material has engaged sales, marketing, leadership conferences from Harley-Davidson to Helsinki, from Memphis to Madrid. PHONE Conor at 630 718 1643