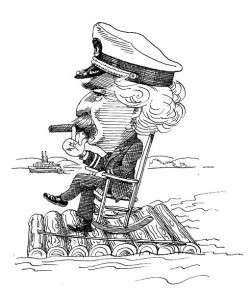 Mark Twain married Olivia Langdon Clemens on Feb 2nd 1870. He was devoted to her until her death thirty-four years later. In asking her wealthy father for permission to marry, Twain furnished a number of references. In his autobiography, Twain indicates that things did not go exactly as planned. This very humorous incident provides a valuable lesson for job seekers.

“In a private talk Mr. Langdon called my attention to something I had already noticed–which was that I was an almost entirely unknown person…. that I was from the other side of the continent, and that only those people out there would be able to furnish me a character, in case I had one. So he asked me for references. I furnished them, and he said we would now suspend our industries and I could go away and wait until he could write to those people and get answers.

In due course answers came. I was sent for and we had another private conference. I had referred him to six prominent men, among them two clergymen (these were all San Franciscans), and he himself had written to a bank cashier who had in earlier years been a Sunday-school superintendent in Elmira and well known to Mr. Langdon. The results were not promising. All those men were frank to a fault. They not only spoke in disapproval of me, but they were quite unnecessarily and exaggeratedly enthusiastic about it. One clergyman (Stebbins) and that ex-Sunday-school superintendent (I wish I could recall his name) added to their black testimony the conviction that I would fill a drunkard’s grave. It was just one of those usual long-distance prophecies. There being no time limit, there is no telling how long you may have to wait. I have waited until now, and the fulfillment seems as far away as ever.

The reading of the letters being finished, there was a good deal of a pause, and it consisted largely of sadness and solemnity. I couldn’t think of anything to say. Mr. Langdon was apparently in the same condition. Finally he raised his handsome head, fixed his clear and candid eye upon me, and said: “What kind of people are these? Haven’t you a friend in the world?”

I said, “Apparently not.”

Then he said: “I’ll be your friend, myself. Take the girl. I know you better than they do.”

Thus dramatically and happily was my fate settled. Afterward, hearing me talking lovingly, admiringly, and fervently of Joe Goodman, he asked me where Goodman lived. I told him out on the Pacific coast. He said: “Why, he seems to be a friend of yours! Is he?”

“Why, then,” he said, “what could you have been thinking of? Why didn’t you refer me to him?”

I said: “Because he would have lied just as straightforwardly on the other side. The others gave me all the vices; Goodman would have given me all the virtues. You wanted unprejudiced testimony, of course. I knew you wouldn’t get it from Goodman. I did believe you would get it from those others, and possibly you did. But it was certainly less complimentary than I was expecting.”

Twain placed a wedding ring on his bride’s finger February 2, 1870. “It was never again removed from her finger for even a moment,” he wrote.

The Lesson for Job Seekers

Why? If the recruiter is checking your credentials, they are pretty confident they have the right person. At best, the reference check will confirm the candidate’s qualities. At worst, well……. At the Community Career Center in Naperville, where I am a board member, it is not normal, but not unusual for us to hear of poor or less than enthusiastic references being provided.

Do NOT gamble with your references. Make very sure you know what they will say. Your job offer depends on it.

In addition to being a Chicago based humorous motivational and sales conference speaker, he also has a deep and abiding passion to help people in job search.