Indomitable Will: LBJ in the Presidency

Excellent read about one of the most compelling and interesting characters ever to hit the White House. The portrait of this “Colossal son of a bitch” as his Press Secretary George Reedy referred to him is painted via oral history compiled by author Mark Updegrove, Director of the Lyndon Baines Johnson Library and Museum, so you can expect a reasonably sympathetic portrayal.

All of Johnson’s personality illuminates this fine book. Johnson was part crude, mean, malicious, self-doubting Texan mixed with a magnificent civil rights and Medicare legislator who had the bravery to take on Southern racists and a man who genuinely cared for the under-privileged.

Wonderful anecdotes about the famous “Johnson Treatment”- where,in one-on-one conversations, he was able to persuade people to come along with him – dot the book. This was a man who might have had the ability to turn Rush Limbaugh into a liberal!

But of course, Johnson’s presidency will be forever framed by the Vietnam War, a war he hated but had no idea how to end. The giant Johnson, despite his bullying ways was an immensely sensitive man and the pain he went through as so many of “our boys” were being killed in Vietnam is reminiscent of Lincoln’s turmoil during the Civil War.

I was surprised to read that even as late as 1966, Johnson was named the “most admired man in America” for the third year running in an annual Gallup Poll. But it was not to last and UpdeGrove takes us through the last two years of his presidency in an increasingly divided country via conversations and recollections from friend, foes and family.

Johnson made life hell for his White House staff, yet so many of them remained incredibly loyal. Just weeks before Johnson was due to leave office, his Special Counsel W. Devier Pierson advised Johnson he was going to interview for a position with a blue chip law firm. Johnson said OK. During the interview with the partners, Johnson phoned the law firm looking for Pierson. The partners excused themselves while an annoyed Pierson took the call advising the President he was at the interview. “I know that…. I didn’t have anything to say. I just thought the call might be helpful.” ! 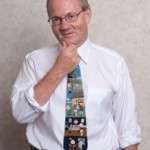 Book review written by Chicago based motivational business speaker, master of ceremonies and humorist whose mission is to improve people, performance and productivity. Conor also happens to be a history buff.

“As a professional master of ceremonies / emcee and motivational business speaker to associations, healthcare and corporate clients, I need to continuously source new material and ideas. That is why I love to read everything from history to humor thru leadership, marketing and biographies. That is one of the reasons why I get repeat engagements as a professional, humorous master of ceremonies, a role I absolutely love.”

Below, is a clip from Conor’s one man show – For the Love of Being Irish.