In January 1886, Mark Twain gave to the Washington Correspondents Club in January 1868 on “Woman and Mothers – A Eulogy of the Fair Sex.”

Mark Twain’s biographer Albert Bigelow Paine (1861-1937) says it was the first of the great man’s after-dinner speeches to be accurately recorded.  The Humorist also manages to skewer journalists while praising women. Below is how the speech was reported the following day. 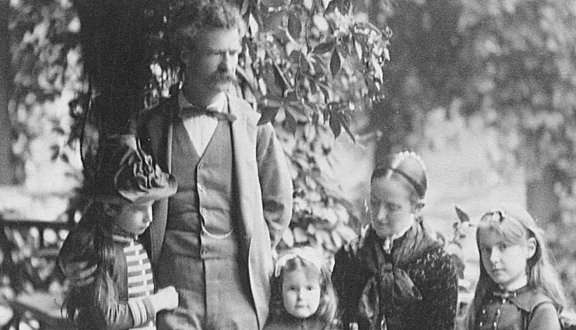 The Washington Correspondents Club held its anniversary on Saturday night. Mr. Clemens, better known as Mark Twain, responded to the toast, “Woman, the pride of the professions and the jewel of ours.” He said:

Mr. President,—I do not know why I should have been singled out to receive the greatest distinction of the evening—for so the office of replying to the toast to woman has been regarded in every age. [Applause.] I do not know why I have received this distinction, unless it be that I am a trifle less homely than the other members of the club. But, be this as it may, Mr. President, I am proud of the position, and you could not have chosen any one who would have accepted it more gladly, or labored with a heartier goodwill to do the subject justice, than I. Because, Sir, I love the sex. [Laughter.] I love all the women, sir, irrespective of age or color. [Laughter.]

Human intelligence cannot estimate what we owe to woman, sir. She sews on our buttons [laughter]; she mends our clothes [laughter]; she ropes us in at the church fairs; she confides in us; she tells us whatever she can find out about the private affairs of the neighbors; she gives good advice, and plenty of it; she gives us a piece of her mind sometimes—and sometimes all of it; she soothes our aching brows; she bears our children…… Ours as a general thing.

In all relations of life, sir, it is but just and a graceful tribute to woman to say of her that she is a brick. [Great laughter.]

Wheresoever you place woman, sir—in whatsoever position or estate—she is an ornament to that place she occupies, and a treasure to the world. [Here Mr. Twain paused, looked inquiringly at his hearers, and remarked that the applause should come in at this point. It came in. Mr. Twain resumed his eulogy.] Look at the noble names of history! Look at Cleopatra! Look at Desdemona! Look at Florence Nightingale! Look at Joan of Arc! Look at Lucretia Borgia! [Disapprobation ex-pressed. “Well,” said Mr. Twain, scratching his head, doubt-fully, “suppose we let Lucretia slide.”] Look at Joyce Heth! Look at Mother Eve! I repeat, sir, look at the illustrious names of history!

Look at the Widow Machree! Look at Lucy Stone! Look at Elizabeth Cady Stanton! Look at George Francis Train! [Great laughter.] And, sir, I say with bowed head and deepest veneration, look at the mother of Washington! She raised a boy that could not lie—could not lie. [Applause.] But he never had any chance. It might have been different with him if he had belonged to a newspaper correspondents’ club. [Laughter, groans, hisses, cries of “put him out.” Mark looked around placidly upon his excited audience, and resumed.]

I repeat, sir, that in whatsoever position you place a woman she is an ornament to society and a treasure to the world. As a sweetheart she has few equals and no superior [laughter]; as a cousin she is convenient; as a wealthy grand-mother with an incurable distemper she is precious; as a wet nurse she has no equal among men! [Laughter.]

What, sir, would the people of this earth be without woman? They would be scarce, sir. Mighty scarce. Then let us cherish her, let us protect her, let us give her our support, our encouragement, our sympathy—ourselves, if we get a chance. [Laughter.]

But, jesting aside, Mr. President, woman is lovable, gracious, kind of heart, beautiful; worthy of all respect, of all esteem, of all deference. Not any here will refuse to drink her health right cordially, for each and every one of us has person-ally known, loved, and honored the very best one of them all—his own mother! [Applause.]

Order a copy today and help Conor keep corned beef and cabbage on the table!