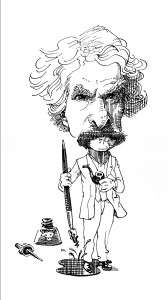 “If you tell the truth you don’t have to remember anything.”

Swimmer Ryan Lochte doesn’t strike me as a guy who spends too much time reading, but he (and all of us) could benefit from Mark Twain words in 1894 when he famously wrote “If you tell the truth you don’t have to remember anything.”

Twain was probably speaking from some experience because he did admit to telling a few “stretchers” during his long, creative life.

In his autobiography, he recounts his mother being asked “”Do you ever believe anything that that boy says?” to which she rather colorfully responded “”He is a well spring of truth, but you can’t bring up the whole well with one bucket. I know his average, therefore he never deceives me. I discount him thirty per cent for embroidery, and what is left is perfect and priceless truth, without a flaw in it anywhere.”

Given that quote, it seems rather ironic that it is Lochte’s mother (who apparently first publicized the story) wasn’t aware for her son’s penchant for embroidery. I do have some sympathy for Lochte that a simple “stretcher” that he surely never even needed to say to his mother now comes back to haunt him. But given what precipitated the incident, maybe Karma is kicking in.

The Problem with “Stretchers” and Speech Embroidery!

Apart from you and me, dear reader, there isn’t a person alive that hasn’t “embroidered” at some stage (a sentence that probably does involve some embroidery!)

As Lochte, Brian Williams and others can testify in today’s media-mad world, Twain’s advice of “When in doubt, tell the truth” is good advice, although in a 1906 speech the great humorist did qualify this a little saying “When in doubt, tell the truth. That maxim I did invent, but never expected it to be applied to me. I did say, ‘When you are in doubt,’ but when I am in doubt myself I use more sagacity!”

Assuming that it is “only” pride and truth that are casualties here, I do wish Lochte and the rest of his buddies – who must surely want to send him on a slow boat to China – the very best as this is likely to be one very expensive mistake for him in terms of endorsements.

Conor Cunneen is a Chicago based professional speaker and business consultant whose mission is to Improve People, Performance and Productivity. This Irishman is authorWhat Mark Twain Learned Me ’bout Public Speakin’