The Eloquent President: A Portrait of Lincoln Through His Words 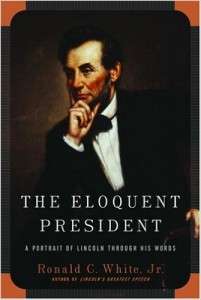 In depth essays on some of The Eloquent President’s greatest speeches and writings.

This is a good study for anyone interested either in Lincoln or “wordsmithing.” We learn that Lincoln liked to edit his speeches by ear, in that he would ask a trusted colleague to read his words back to him. Interesting concept and one with much merit.

Lincoln was happy to take advice from those he trusted, most famously when he accepted many of William Seward’s suggestions about his first inaugural, in a speech which was savaged by his critics and most of the English press which “almost universally” spoke of it as “feeble, equivocal and temporizing.”

While I was aware that many had an initially inferior opinion of Lincoln, even after his election, I was intrigued that Edward Everett, who spoke for two hours at Gettysburg, prior to Lincoln’s famous address, said of Lincoln in 1861, “He is evidently a person of very inferior cast of character, wholly unequal to the crisis.”

White shows how Lincoln developed some key concepts and phrases over time. “Government of the people, by the people, for the people” was not just a Gettysburg phrase but echoed what he said in a message to Congress, July 4 1861.

One annoying element running through this book as with most laudatory books about this great president is the “wonderfulness” of everything he did. For instance, White’s rational for Lincoln’s use of “Four score and seven” at Gettysburg is “Lincoln was asking his audience to calculate backward QUICKLY (my emphasis) to discover that the nation’s starting point was not the Constitution …. but 1776 and the signing of the Declaration of Independence.” As my brother might say, “Can you run that by me again?”

Overall though, this is a fine read about a better than fine President.

Conor Cunneen is a Chicago based humorous, business, motivational speaker whose goal is to improve People, Performance and Productivity.

PHONE Conor at 630 718 1643 when seeking a motivational, humorous business speaker to Energize, Educate, Entertain and Engage

Below, is a clip from Conor’s one man show – For the Love of Being Irish. Elements of this clip relate to Abraham Lincoln’s time in office.