“Joe was passing under a fictitious name, and old Wakeman didn’t suspect that he was a parson; so he gave his PROFANITY full swing…”

“MY DEAR SIR,—I was not aware that old Sir Thomas had anticipated that story, and I am much obliged to you for furnishing me the paragraph. It is curious that the same idea should leave entered two heads so unlike as the head of that wise old philosopher and that of Captain Ned Wakeman, a splendidly uncultured old sailor, but in his own opinion a thinker by divine right. He was an old friend of mine of many years’ standing; I made two or three voyages with him, and found him a darling in many ways. The petroleum story was not told to me; he told it to Joe Twichell, who ran across him by accident on a sea voyage where I think the two were the only passengers.

A delicious pair, and admirably mated, they took to each other at once and became as thick as thieves. Joe was passing under a fictitious name, and old Wakeman didn’t suspect that he was a parson; so he gave his PROFANITY full swing, and he

was a master of that great art. You probably know Twichell, and will know that that is a kind of refreshment which he is very capable of enjoying. 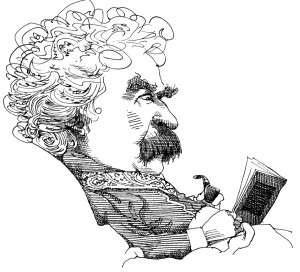 “When I say I’ll learn (‘Teach’ is not in the river vocabulary) a man the river, I mean it. And you can depend on it, I’ll learn him or kill him.’  Life on the Mississippi – Mark Twain